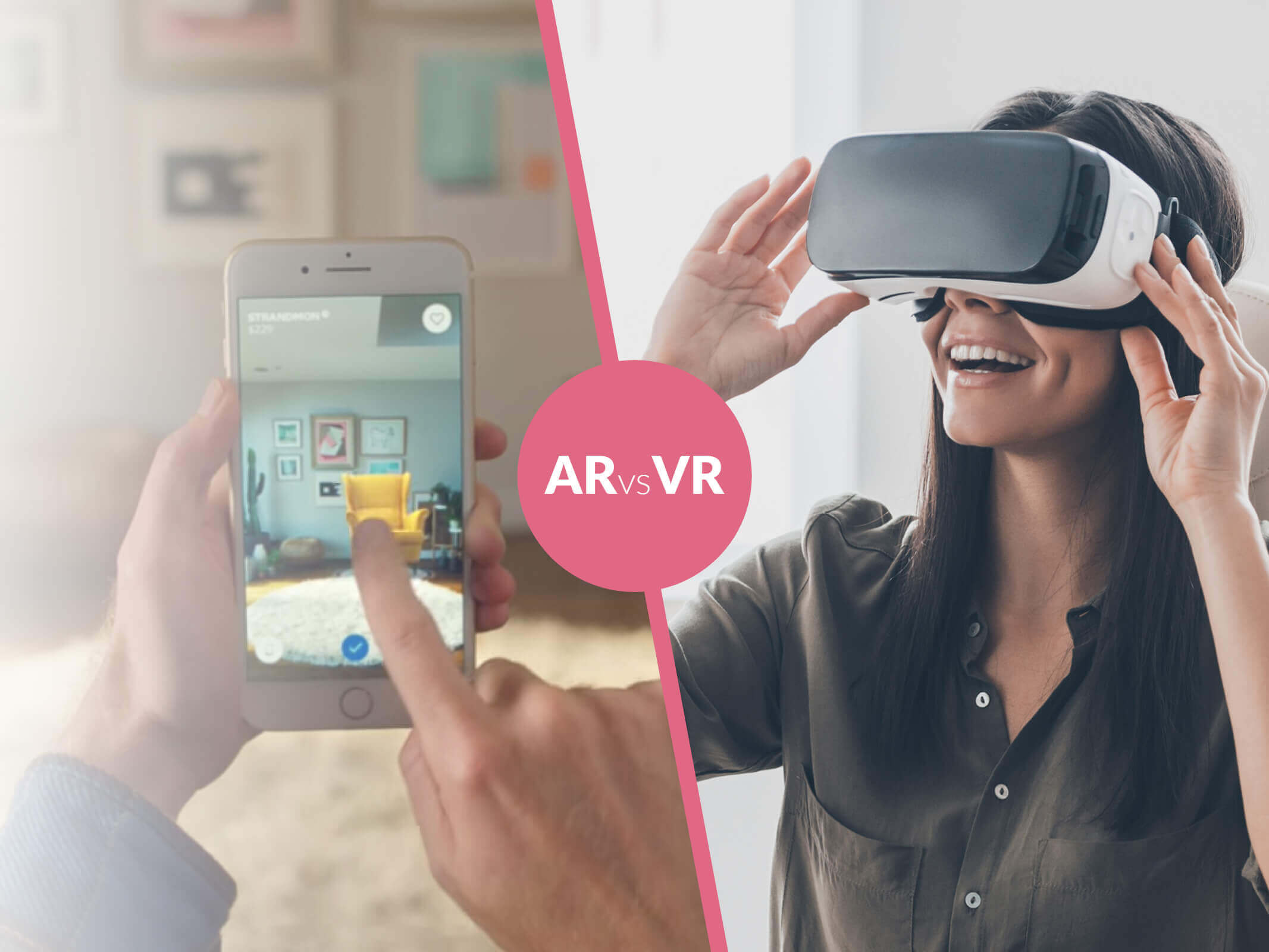 Augmented Reality (AR) and Virtual Reality (VR) can be confusing. Both have been on the technology scene for years as promises to offer a new way of communicating, playing and web surfing, but the two are still seen as cutting edge by those who adopt them in their projects. Both virtual reality and augmented reality have been available for years, but it is now that they are truly thriving: in 2018 only, investment in these sectors reached $17.8 billion, an increase of almost 95% over 2017. This article will explain the differences and real world applications of AR and VR.

What Is Virtual Reality?

Virtual Reality or (VR), is about the digital world. It is when the images and sounds around you are replaced by virtual content, generated and managed by a computer. This “fake environment”, made with graphic elements, can be very similar to the real world. VR is able to engage you in three dimensions to convey an illusion (as in a video game or in a 360-degree basketball game broadcast), even if these spaces are partially or fully navigable and interactive. As you move and use your hands, you can even manipulate objects.

Virtual reality is an advanced interface, which allows a user to play or see something. The objective is to recreate the sensations of “reality” as much as possible, allowing interaction with virtual objects, in real time, without connection with the physical.

Also Read – Why Should You Invest in Artificial Intelligence (AI) in 2020?

What Is Augmented Reality?

Augmented Reality or (AR), is about the real world. It is when you look at an existing environment and see overlapping elements, with information and graphics specific to a location. It is worth noting that this is not the same as using a Google Glass, which only displays information before your eyes without linking it with data from places or making them relevant to that space.

You may have seen people playing Pokemon GO, or measuring environments through the phone’s camera – as does Measure, from iOS – or even experiencing how furniture looks in the living room with the camera. These examples help to understand how AR works: it is the integration of virtual information (on the screen) and the real world.

Augmented reality can be defined as a system that combines virtual elements with a real environment, is interactive and has real-time processing and is designed and displayed in three dimensions. 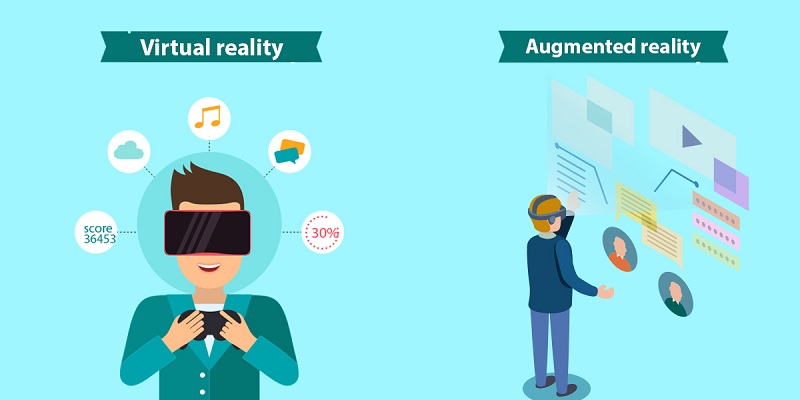 The main difference between the two realities is in the purpose for which they were created. Augmented reality includes components that can interact with what already exists. Virtual reality creates its own environment, totally new and independent from the real world.

The second distinction is the price, directly linked to the way of using each one. To enter a virtual reality, the user needs a device that completely blocks his view of the real world, thus inducing him to complete immersion. For augmented reality, the use is simpler: just a mobile device such as a smartphone with access to the desired applications.

What Is Mixed Reality?

The two technologies, however, are increasingly closer and are now being used together. The term Mixed Reality (or MR), of course, describes the technology that combines the overlapping of augmented reality in the real world with the ability of virtual reality to insert graphic and digital elements on the viewing screen. Mixed reality, a concept widely used by Microsoft, developer of HoloLens, already gives some examples of how it is possible to unite the two universes in the field of health in surgeries. AR on Apple’s iOS 12 also mixes the virtual and real world with support for the detection and tracking of 3D images and objects and automatic application in apps.

Medicine is one of the areas that is undergoing the most transformations with virtual reality. Resident doctors, for example, can now train surgeries in an immersive way so that they have greater security when performing procedures in real settings. They can also follow live surgery being performed, without having to fight for space in the room, or having to look over the shoulders of the head surgeon. In treatments, immersion makes a difference.

Hospitalized children may have their recovery impaired by feelings caused by the hospital environment, which is not very pleasant even for adults, says John B. Cofield, marketer writer at 1day2write.com and Writemyx.com. However, with projects like VisitU, they can talk to their parents and feel at home. And if you think virtual reality is a thing of the future, think again. The University of Southern California has, since 1997, been running a program that uses virtual reality to treat individuals with post-traumatic stress disorder.

As in medicine, virtual and augmented realities can help train employees in the hotel sector. On the guest side, technology enhances the experience of stay and entertainment. When you arrive at a hotel for the first time, aren’t you a little lost to find your room, breakfast, gym and other common areas? With immersive technologies, it is possible to present the place to the guest in a more practical way. An Oracle survey also shows that hotel operators believe that AR and VR technologies will be widespread by 2025 for instances such as entertainment for guests at the property and choice of meeting rooms.

Augmented Reality (AR) and Virtual Reality (VR) are long known in product design and in the prototyping process. Industries are also using technologies for training and even safety testing, which would be very dangerous if carried out in a real-world setting. On the assembly line, augmented reality glasses should assist employees with always up-to-date parts installation instructions, including video, as well as providing quick access to product manuals. “All this with hands free to work, through infrastructure in the cloud, increasing productivity and reducing costs”, says Martha D. Eaton, web developer at Britstudent.com and Nextcoursework.com.

When it comes to virtual reality, people are already shopping within the virtual environment, especially when the products in question are movies and games. But physical products are also likely to ride this wave, and services like Payscout are using Oracle Financials Cloud to connect banks and credit cards to payment platforms in virtual reality.

Other Applications of Augmented Reality (AR) and Virtual Reality (VR) –

A realtor can offer the client a visit inside a property that is miles away from the real estate via virtual reality glasses. Another example are the roller coaster simulations, motor sport and extreme sports practices in virtual reality, which can offer the customer the cold in the belly that would come with the experience, but with the safety of a comfortable chair. American soldiers, for example, do training exercises in simulated environments – many of them are immersed in virtual reality.

In addition, during the environmental disaster in the city of Mariana, some photographers recorded the scenes in 360° so that the public could see the damage later with the help of virtual reality. Just as in this case, videos and photos can be used for viewers to follow a virtual reality broadcast walking the news scene, wherever it is, and researchers at the University of Louisville have tested virtual reality in the treatment of anxiety-related illnesses, safely exposing patients to their fears so they can get rid of phobias.

Augmented reality has barely arrived and has been transforming the way civil construction has been carried out. The change is not only in designing and modeling, but also in building. Augmented reality benefits engineers, designers, architects, project managers, service providers – and the entire construction team.

An objective analysis will be used to decide the most relevant applications for each business or action. In the coming years we will have a greater awareness of these devices and technological experiences, since they are favored by the evolution of computing and technology resources – in addition to being more available, they will also be more evolved. Today, there is no human need to experience a direct relationship with digital.

These Realities have been studied for many years and only recently have they gained more “functionality”, mainly due to the maturation and massive distribution of technology and soon the expansion of speed. As an example of this expansion, we can point out 5G – which promises download speeds 10 to 20 times faster than we have today. With this, it will be possible to increase the data generation capacity at a much greater speed, and will favor the exchange of information and interactivity between devices.

Currently, we spend a lot of time looking at screens. Computers, phones and televisions are part of our lives. It is in these places that we discover, communicate, entertain ourselves, among other things. Virtual reality and augmented reality are two technologies that are changing the way we use these screens, creating new and exciting interactive experiences. These two technologies have the possibility to significantly change almost all sectors. Be on the lookout to see how you can implement them in your work and in your everyday life.

Michael Dehoyos is a web developer at PhDKingdom.com and AcademicBrits.com. He assists companies in their marketing strategy concepts, and contributes to numerous sites and publications. He’s also a writer at Academic Paper Help Service. Michael enjoys meditation, watching YouTube videos and binge-watching boxed sets. He is ambitious and creative, and describes himself as a “coffee-addict”. He often volunteers at his local health centres.

Next Post Impact of Coronavirus on Digital Marketing & Ecommerce Industry